After arriving in Venice on the night of the 30th, we checked in at the Instituto San Giuseppe, a monastery that runs a daycare & primary school and also a boarding house for visitors to the city. 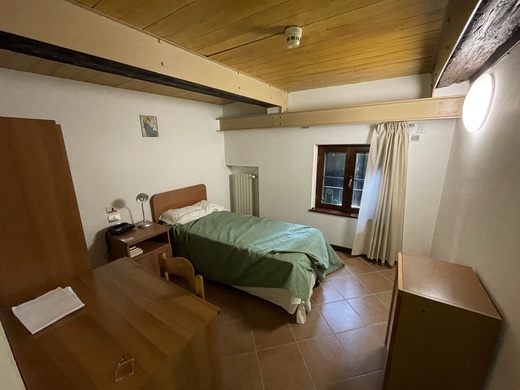 Each of our rooms was like this. Pretty basic but comfortable and nothing to complain about except that Wi-Fi is only available in the common area/kitchen on the first floor, not on the rooms which are on the 4th floor.

On the morning of Oct 1, we headed out to St. Mark’s Square (San Marco) where we met at 9:15 beneath the twin columns. Because we’d have only one full day of visiting we had booked tickets for a guided tour group. The tour did provide “skip the line” access although the normal line did not actually look that long in the morning. The guide mentioned to us that before COVID-19 in 2020 things had gotten so crowded that there was a line for “skip the line” as well!

In the square is the first “digital” clock. Giant bronze robots clang hammers on the bell every hour, and every 5 minutes the time below updates, as in this image from 9:55 to 10:00 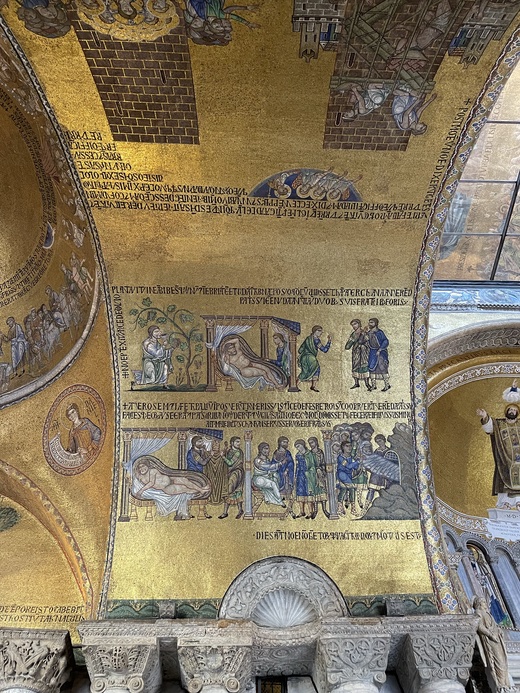 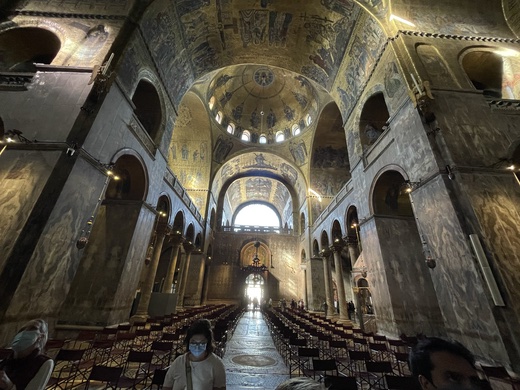 We proceeded inside the church where we admired the beautiful mosaics. Their artists are unknown, but likely from Greece or the Near East. 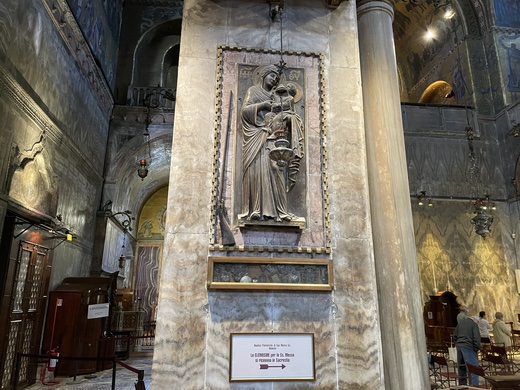 This statue of the Virgin Mary has an unlikely sidekick - a rifle, used in the revolution of 1848 against Austrian rule.

Afterward, we began a walking tour around the area between San Marco and Rialto Bridge. 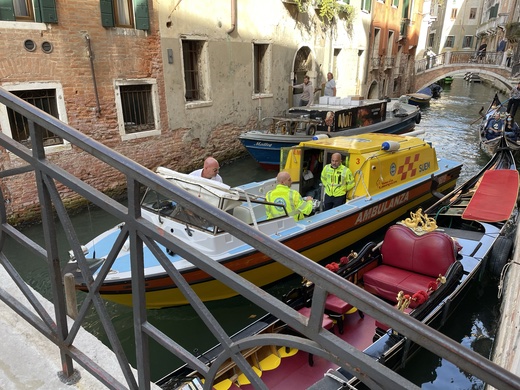 We spotted a ambulance boat navigating the Rio, or small canal. 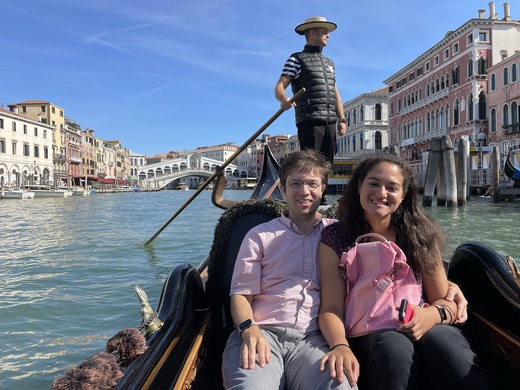 At the end of the morning’s tour, the guide dropped us and our two tour companions off with the gondolier, who took us on a 30 minute ride around the area of the Rialto bridge.

After a hour-and-a-half break for lunch, we hurried back to the meeting point again for the afternoon tour of the Doge’s Palace. 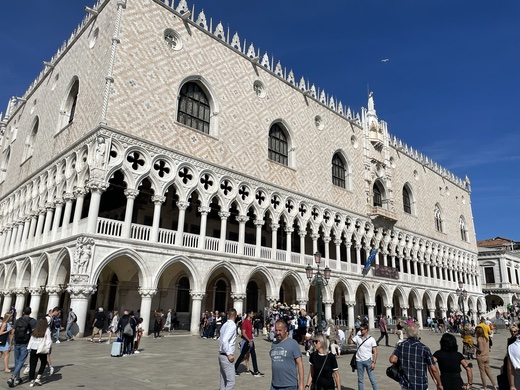 The palace is on the right as you arrive at St. Mark’s Square from the sea. 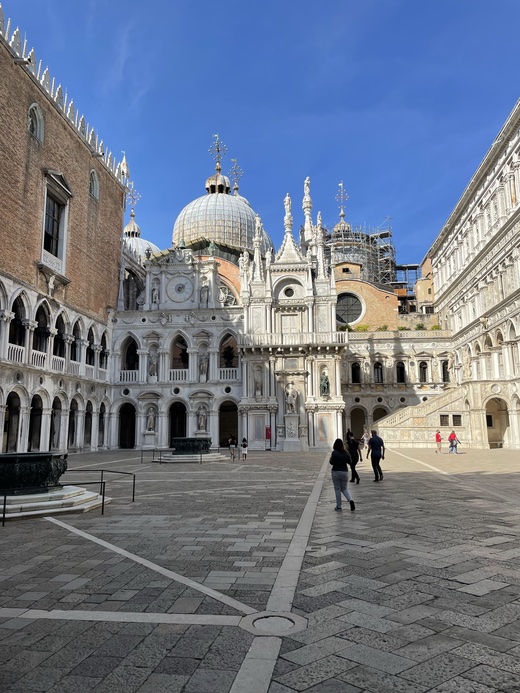 The St. Mark’s church, formerly the possession of the Doge, rises above the courtyard of his adjoining palace. While acting as the formal head of state, the Doge was accountable to the Senate and councilors who also met here. 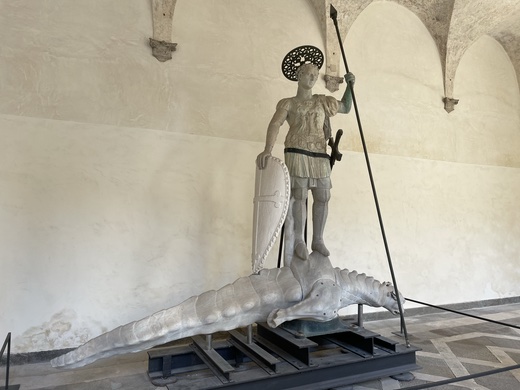 This restored statue of St Theodore defeating a dragon (like St George?) was pieced together in the Middle Ages from various other statues like a head that originally depicted Constantine. It has been moved from atop the column in St. Mark’s Square to here for protection, and a replica stands in its place. 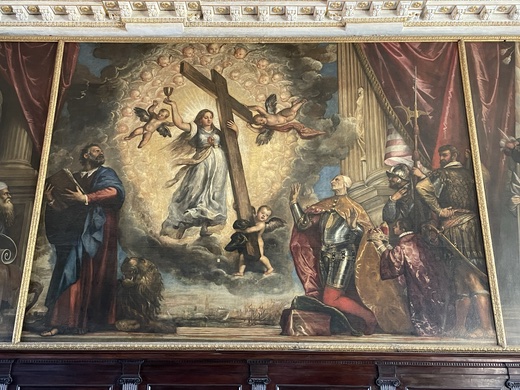 Beautiful, huge paintings line the palace. Many are by the Venetian artist Tintoretto. 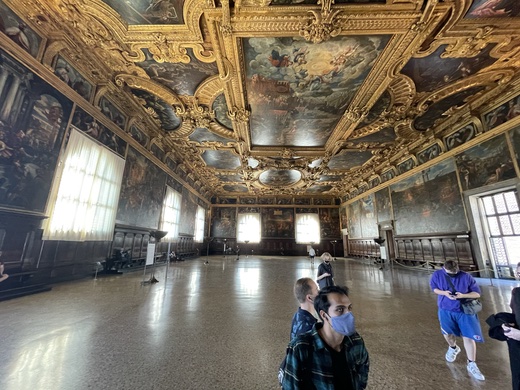 The high ceilings are gilded, but made of wood in order to allow this vast space to stand without supporting columns (and perhaps also to help keep the palace from being too heavy and sinking?)

After touring the palatial chambers and halls of justice, we proceeded also to see the attached “new prisons” where prisoners were held. Accommodations were spartan, but better than in most prisons of the time. 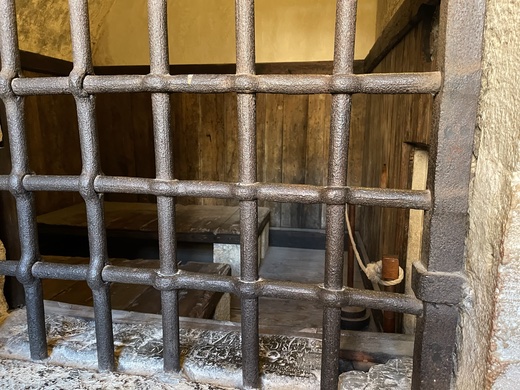 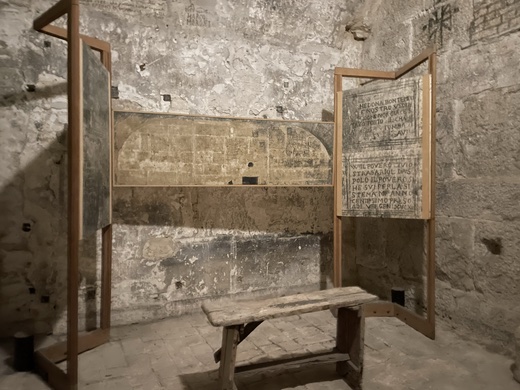 A schoolhouse area was provided where prisoners could be taught to read and write if they were unlearned.

After touring the palace, we took a break and then purchased water bus (vaporetto) passes for a night time tour of the Grand Canal, narrated via the Rick Steves Audio Europe app. After a few mistakes getting there, we started at the bus station stop and rode the #2 vaporetto to San Marco, enjoying the beautiful sights of the palaces as they were originally meant to be appreciated: from the water. 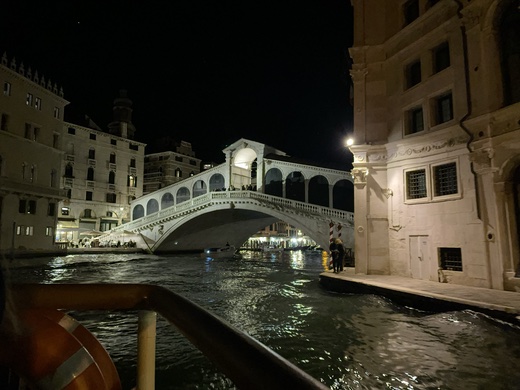 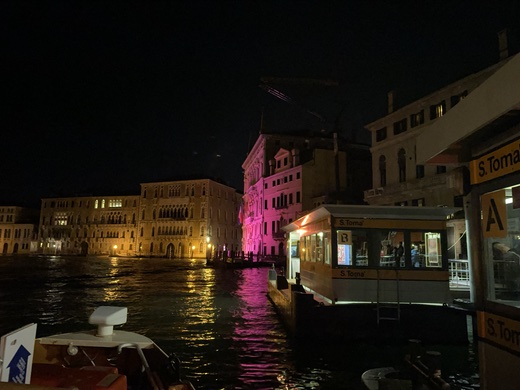 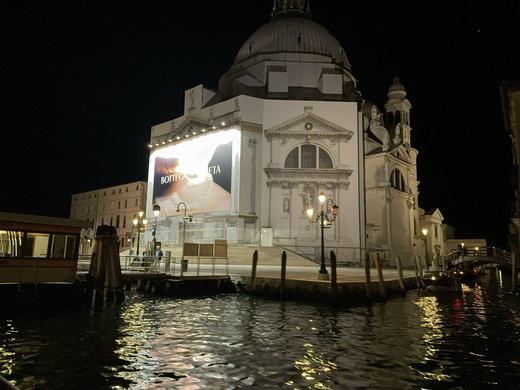 After the “cruise”, we landed at St. Mark’s square again and quickly found some pizza to eat before making it back before the curfew of 11 p.m. at the monastery!

There’s not too much to say yet about Oct 2, as we simply got up and wandered around before getting croissants from a cafe and a drinkable yoghurt from the supermarket. We then re-used our vaporetto passes from the previous night and headed to the the train station, where we departed and are now on our way back to Rome, from where Christina will leave for America tomorrow.