OK, this is a little late :) I meant to write my final post on the plane but then I got lazy and didn’t make the time until now.

(These links are, like my other albums, only accessible to my Facebook friends. I’ve sent a non-Facebook user link to my parents so you may be able to view the photos by getting those links from them or me)

This was a museum day. We started by walking out past Hagia Sophia (or Ayasofya as the local signage calls it) to see if there was a big crowd there in the morning. On Tuesday we saw so many people waiting there that we decided to skip it for that day (apparently, because Topkapi Palace is closed on Tuesday, more of the tourist groups head to the Hagia Sophia). 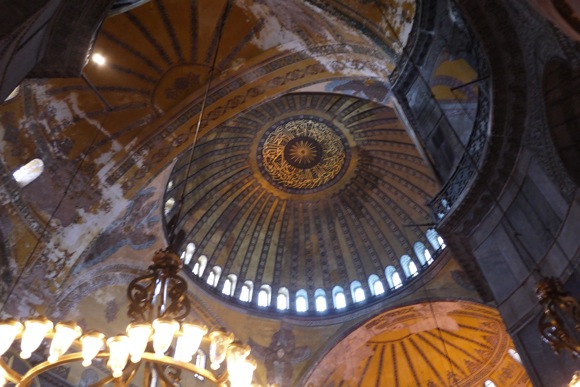 The main dome of Hagia Sophia.

Quite a bit of the Byzantine-era art inside the church still survives and the structure itself remains substantially the same as the original 6th-century church constructed by the emperor Justinian. When the city fell to the Turks, some of the mosaics were whitewashed and so survived to this day. After the fall of the Ottoman empire and the Turkish war of independence, Atatürk made the Hagia Sophia into a museum instead of a mosque, and the remaining artwork was uncovered.

Mosaic in the south gallery, showing Christ flanked by the Virgin and John the Baptist.

After Hagia Sophia we went looking for the Islamic Arts museum, but went into a different art museum instead sort-of by accident. (Actually, the Museum of Turkish and Islamic Arts is closed for renovation all year so we couldn’t have gone in anyway.) I think that the museum we actually went to was the Marmara University art gallery - it was a fairly small museum with only 1 floor and corridor open to visitors with a number of 20th century Turkish pieces. My favorite was a room devoted to İhap Hulusi Görey which showed a great collection of his works. There is a virtual exhibition online where some of them can be seen.

We had lunch at Buhara 93, a crowded restaurant on a street near the Hippodrome. I don’t remember what I had but the food was good.

We then went to the Istanbul Archeological Museum for the afternoon. The museum has several buildings, although I only was able to go through part of one before it closed at 5 pm. There is a great collection of ancient pieces there including sculptures and funerary art from throughout Anatolia. I took a few photos which are included in my album for this day. In addition to the building I visited, there is also a museum for Oriental art and a tile museum.

We had also hoped to visit Chora Church and see the mosaics there but sadly we didn’t realize until Tuesday night that the Chora Church museum is not open on Wednesdays, and so we had to miss it. :-( If I ever get the chance to go back it’s #1 on my list now!

Then we were packing! Tomorrow we would leave Istanbul on a new adventure.

On Thursday morning we flew on AtlasJet from Atatürk airport in Istanbul to the Izmir airport. Izmir is where the ancient city of Nicaea once stood but we had a different goal - the ruins of Ephesus outside the modern town of Selçuk. Ephesus was once a major city in this region with a population of more than 100,000 people (which in ancient times was actually quite large), and was capital of the province during the early Roman Imperial period. However, its administrative role was removed by the increasing influence of the new Roman capital, Constantinople, and the economic position of the city was seriously hurt by the silting of the harbor from the nearby river – the water eventually moved several miles away and it became impossible to continue the upkeep of the harbor.

As a result Ephesus provides one of the best-preserved remains of an ancient city. Most of the structures were simply buried by dirt over time and have survived to this day. 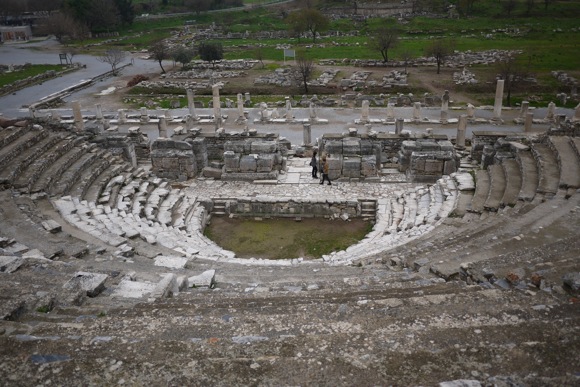 The amphitheater. This is where the local silversmiths rioted against Christianity, as recorded in the Acts of the Apostles 19:21ff., worrying that the new religion would reduce the demand for locally produced images of Artemis.

There are so many places within the city that it would be difficult to list them all, but it was all very fascinating. There is also an enclosed structure covering the excavation of the Terrace Houses that charges an additional fee, but we didn’t go in there as we ended up spending all the time we had looking at the rest of the ruins. Ephesus is still an active archeological site and I got some photos of workers digging!

We went to Ejder Restaurant for dinner. This is a great family-run place in the Selçuk downtown area near where we were staying. The owner showed us their guest book including Steve Irwin! We really had a great time and also talked to a Dutch couple who were traveling in the country after the husband had come to Turkey for a conference related to his work.

We came here on Friday morning.

This small house, now in the form of a chapel, is, according to one tradition, where the Virgin Mary lived after the apostle St. John, her caretaker, came to Ephesus to preach the gospel here. I’m not sure if it really is Mary’s house (there is another, more ancient tradition, that she died in Jerusalem in the 50s AD – the house corresponding to this would be that of Our Lady of Loreto), but it is an official Catholic pilgrimage site and Popes John Paul II and Benedict XVI have both come here to pray. There is also a nice framed Latin certificate from the pontificate of Pius XII giving an indulgence to those who come here. 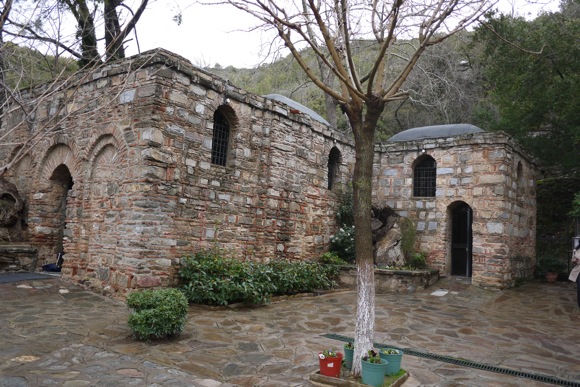 Mary is also honored in the Koran and so Muslim pilgrims also come here to pray. It is 7 or 8 km away from Selçuk, and quite high up too, so we had to take a taxi instead of walking.

After we came back from Mary’s house, we walked around the periphery of the castle which was erected here by the Seljuk Turks in the time of the crusades, soon after they had taken control of this region from the Byzantine Empire. We made a short stop at the Isa Bey Mosque and then went to the ruins of St. John’s church, a 6th-century Byzantine structure built during the reign of Justinian atop the tomb of John the apostle. These ruins are now a museum run by the Turkish government. 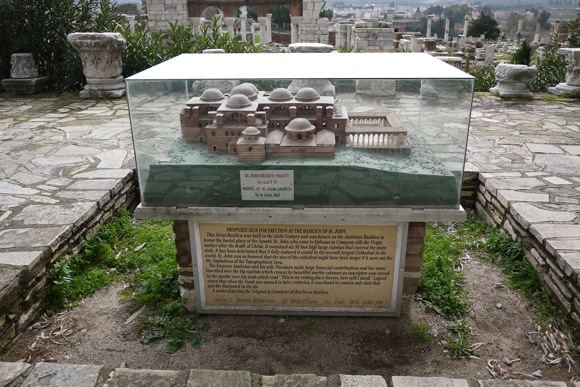 Some sketchy guy here tried to sell me and Lisa supposed Roman coins for $20 a pop. Apparently it is actually possible to buy these on eBay too. That said, I’ve never been much of a coin collector, and buying them would have been illegal if they were actually real (Turkey, like most countries, now has a law prohibiting taking ancient artifacts out of the country.) 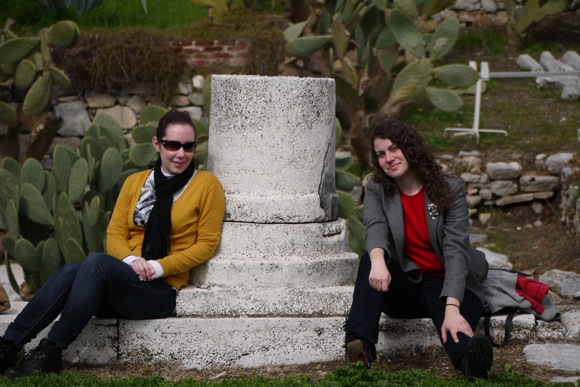 Lisa and Angele next to one of the columns in the courtyard. This was the warmest day we had while visiting - temperatures were in the 50s (°F) and I could even take off my coat comfortably!

After visiting the church we went back down to the town’s center and went into one of the local shops and bought ourselves a picnic lunch near the ancient aqueduct while we waited for the AtlasJet shuttle to take us back to the airport. This was great and also really inexpensive – fresh bread and cheese :) It threatened to rain but never got worse than a few drops.

We then went down and waited for the shuttle (which arrived precisely on time, 2 hours and 15 minutes before the flight), and were on our way back to Istanbul!

Back in Istanbul and Imbat Restaurant

By the time we got back there was just enough time to relax before we headed out to dinner at the #1 restaurant from TripAdvisor, Imbat Restaurant. It’s definitely not a local place and caters to the tourist crowd (everyone speaks English - even their website seems to be in English by default). That said the food and the service were both great and well worth the relatively small premium. The view is also fantastic - it is located near the Sirkeci train station and on the top floor of a hotel, so there is a great view across the river showing the new district of the city. Since it was raining and somewhat cold due to the time of year, there was no outside seating but in the summer they have some tables outside on a balcony, which I imagine would be grand too.

After our late dinner it was back to the hotel, time to pack and get ready for our flight out in the early afternoon Saturday! Our trip is now over. We had a fairly uneventful flight back and returned to IAD-Washington airport at about 7pm – I went home and went straight to bed!