I was going to write one yesterday, but then I didn’t. So we get another two days in one here :)

We spent this day taking a cruise all the way up the Bosphorus, from Istanbul to Anadolu Kavagı. We took ship on the ferry offered by the official company, Şehir Hatları, at a little after 10:30 in the morning. The docks before we got to the boat are also lined with private companies attempting to sell tours on their boats (these tours are actually much shorter and not really worth it, so we stuck with the recommendation in my trusty Rick Steves’ Istanbul). The salesmen for the private companies shout “Bosphorus Bosphorus” to passing pedestrians, which I found a bit amusing.

The tour also provided an excellent auto guide for 5 TL (and an ID deposit to ensure the safe return of their little GPS audio tour device). The device itself is about the size of a Garmin GPS navigation unit and includes headphones, and plays the corresponding audio information automatically as the ship passes each point of interest. There were several dozen POIs so it was chattering almost constantly for a while, but much good information was given.

With the temperature in the 40s (°F) and some wind from the boat’s movement, it was quite chilly on the top deck. Nonetheless I braved it for as long as I could in order to take photos.

Lisa Campbell on the top deck of the ferry.

Once we arrived in Anadolu Kavagı, we decided to hike up to Yoros Castle on the hilltop first, to ensure we had enough time for lunch. According to Rick Steves, the castle is the main attraction in this area aside from the many eateries that dot the area around where the tour boat docks.

View of the European side of the Bosphorus coastline opening into the Black Sea.

The castle is great for taking pictures and provides an ideal view of the Black Sea. The castle itself was an important strategic location from a military perspective and the Turkish military still maintains a base in this area.

Afterward we had lunch at one of the local restaurants near the dock. On the way back Lisa took some shots with my camera, I particularly liked this one: 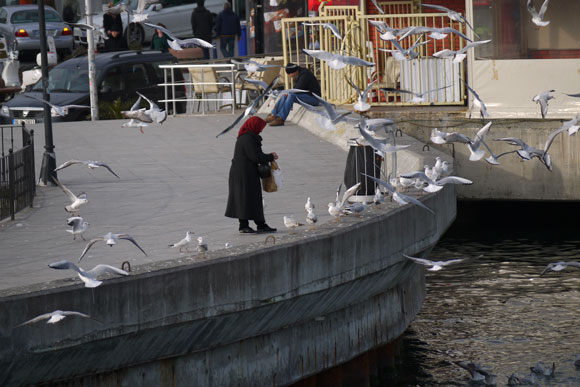 Afterwards we ducked into the New Mosque (Valide Sultan Camii) which is located right near the Galata Bridge and the ferry dock. I have a few pictures I took in the courtyard here, but didn’t take any inside.

We were going to go inside the Hagia Sophia today too but we saw it was quite crowded in the morning (probably because of Topkapi Palace being closed), so decided to wait until tomorrow. Instead we went to the Blue Mosque, which is right across from it.

Outer courtyard of the Blue Mosque.

Then we went to the Grand Bazaar, “the world’s oldest shopping mall,” originally a Byzantine market in the 15th century. We did not go down every alley, but the Bazaar is absolutely filled with various (small) shops selling anything from gold, to jewelry, to scarves, and even an entire denim section. Although all other stores in the city have adopted our modern civilized custom of fixed prices and no haggling, the bazaar still caters more to the touristy side of things by offering a haggling experience.

Afterwards we went to the Süleymaniye Mosque, the largest mosque in the city, built in the 16th century during the reign of Suleyman the Magnificent.

Finally we walked back across the Galata Bridge to the new district and went up and down the pedestrian shopping street of İstiklâl (this is the same street where St Anthony’s Church is, so we were already here briefly on Sunday). It is a long street and there are many stores and also a “nostalgic tramway” that runs up and down the center of the street on a single track.

I catalogued the photographs from the first four days that I took with my GF3 and picked the best ones, so they are now online on Facebook (this link will work only for my Facebook friends). If you are not on Facebook, ask me and I can send you the link that allows you to view them anyway.